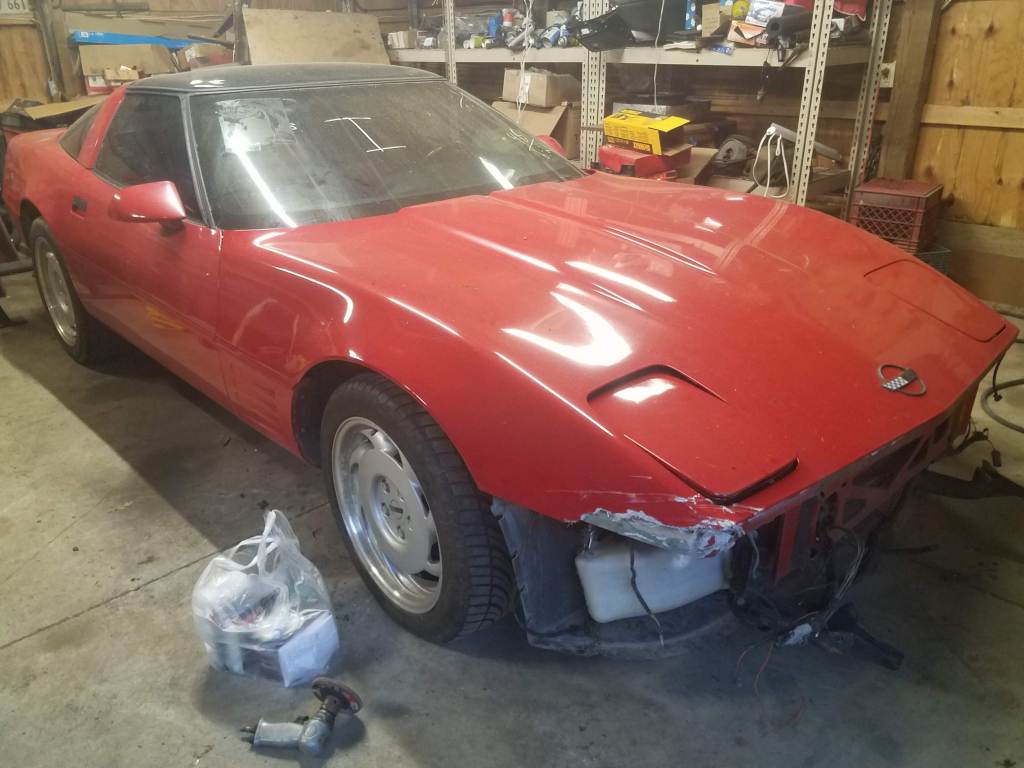 We picked up a 91 Vette that we were going to make into a road race car, but when it arrived we decided that the car was too nice to do that. So we thought it would be a good idea to make it the shop test car.

The car has only 68,000 miles on the clock and is overall good shape. It was already a manual car with the ZF 6 speed. We bought the Vette from the salvage auction and it had minor damage as the bumper cover was torn off and the corner of the hood was cracked.

The engine and transmission we used is out of a 2010 Camaro SS. The factory horsepower on this engine is 425. The Corvette had the L98 which is a 5.7 liter rated at 245 horsepower. This swap would give us an easy 180 hp bump. However, we weren’t going to stop there. We added a cam from Texas Speed, their Stage 3, a Fast 102 intake and throttle body, along with long tube headers and a full 3″ exhaust.

If you read about swapping a C4 Corvette on the forums, most will say that you are better off buying a C5 or later Corvette as they come with the LS and because the C4 is a difficult swap. We didn’t listen and forged ahead.

The biggest issue we ran into is that the ZF transmission is an oddball. It wasn’t used in any other GM product and it uses a pull style clutch. After researching clutch options we decided the best route was to use the Camaro transmission.

We found a write up saying the frame mounts need cut out and new mounts welded in to replicate the C5 style of mounting. The only reason we could find for this was to run a low mount A/C compressor. Dirty Dingo offers a high mount compressor bracket system that places the compressor on the passenger side. We chose to use the Dirty Dingo compressor mount and keep the L98 frame mounts. Unlike most Chevy’s around 1991, the Corvette has the rubber part of the mount bolted to the engine. Dirty dingo also offers SBC to LS mount adapter plates so you can use your original mounts.

The adapter plates have 4 positions to bolt on the mount. We had read about having to cut the evaporator housing and use a different wiper motor because of clearance issues. We tried the second position from the rear in order to move the engine forward to gain clearance. Because the LS3 is all aluminum we don’t think this will hurt the car’s handling as the engine itself is lighter. This position moves the engine forward about 1 1/2″. The rubber part of the mount is wrapped in steel so we are not afraid of it pulling apart.

We bolted a C5 Corvette pan onto the LS3 and swung it into the car and the bolt holes for mounts and the frame would not line up. Upon closer inspection, the oil pan was sitting on the crossmember not allowing the engine to drop down far enough. We pulled the engine out and bolted a LS1 Camaro pan on. This time it fit. The Camaro pan is much shallower in the front and since we had moved the engine forward we needed the extra clearance.

As can bee seen in the pictures above, we have plenty of room between the evaporator housing and the wiper motor. One of the crossmember braces needed reworked to give clearance to the oil pan. Up front we still have plenty of room for our accessories.

C5 Corvette accessories fit perfect. The C5 power steering hose fits onto the C4 rack with only a little bit of tweaking.

In these pictures, you can see the completed c-beam bracket, the wire-frame to locate the shifter hole and the TR6060 driveshaft adapter. The Camaro rear mount bolts on to the sides of the rear housing and we used one of these to attach the c-beam mount. To connect the hydraulic clutch hose, we bought a bubble flare to 3-AN adapter for the Corvette hose and a GM quick connect to 3-AN adapter for the transmission. We connected these with a 3-AN 90 degree swivel fitting.

The Camaro shifter is aluminum, so we looked to see what else might work. We were building a GT500 engine swap kit for a customer and the shifter on it looked like one that could easily be adapted. Plus it is made from steel tubing and the GT500 also uses the TR6060. We found one on Ebay and it arrived within a week. A little cutting and welding and we had our shifter.

Both the Camaro and GT500 shifters mount to the floorpan in the rear. Because the Corvette is fiberglass we mounted the shifter solid to the transmission. Now did our wire frame get us close enough?

Here is what it looks like all bolted together.

The driveshaft adapter requires the use of slip joint driveshaft like found in pickup trucks with a carrier bearing. The adapter uses a Spicer 1350 u joint and the Corvette yoke uses a Spicer 1310 u joint. We took measurements and our local driveshaft shop had us a driveshaft the same day. Our shaft measured 28 1/2″ center to center on the u joint caps.

We bought a cheap set of C5 headers off of Ebay hoping they would fit with minor adjusting. We were wrong. Well, half wrong, the drivers side almost fit but the passenger side was not going to fit at all. We have headers laying around from the cars we dismantle and we tried a set from a CTS-V. The passenger side fit with only a couple of dings for clearance. The drivers side slid in like it was made for the Corvette except the collector hit the floor. We cut the collector off, moved the individual tubes to fit better and welded the collector back on. We could have purchased C4 LS swap headers, but this is our test car and we like to make what we have fit.

We have a bunch of exhaust systems off the cars we dismantle. A lot of them are aftermarket. We cut up some of these to build a full 3″ exhaust with an x pipe and cut outs.

At the back we reused the mufflers that were originally on the Corvette for the stock appearance.

With everything under the car finished it was time to move to the top and complete the brackets and wiring.

The Dirty Dingo compressor bracket almost fit. It might have fit if we hadn’t moved the engine forward. In the picture on top you can see how close the bracket is to the passenger side upper control arm mount. We had to cut the corner off of the bracket and re-drill the mounting holes for the tensioner arm. We pulled the tensioner arm to it’s limit and ran a tape measure around all the pulleys and bought a belt to match our measurement of 100″. The belt fit perfect. We went to our local Oreilly Auto Parts and found a pair of premolded 90 degree heater hoses to adapt to the original hoses. Summit Racing sells a Billet Specialties straight on thermostat housing (BSP-BLK90134) that puts the hose in line for the Corvette radiator.

We reused the Corvette radiator and fans since they were in good shape. We wired the fan control wires into the fan relays in the Mars fuse box. The center picture shows how easy it is to hide the fuse box.

We wanted to make the factory guages work. We used Autometer’s LS installation kit (PN#5284) that includes adapters and a temperature sensor to fit in the LS cylinder head. The kit also includes a resistor to allow your to strengthen the tach signal. If you are running an aftermarket tach you set it to 4 cylinder as the LS puts out a 4 cylinder signal. We used Dakota Digital’s tach signal converter (SGI-8E) to make the factory tach read correctly. The Corvette uses a electronic signal to operate the speedometer but the Camaro signal uses a different pulse per mile. We used Dakota Digital’s speedometer signal converter (SGI-5E) to make the speedometer operate.

For the oil pressure we used the original Corvette sender and adapted it to the LS3.

To make the engine run is super easy. The wiring included in the kit requires that you connect a power wire to the car. We used the post on the back of the alternator since the Corvette harness already has a wire running to the battery connected there. The second wire to connect is the ignition wire. On older cars you can use the wire that feeds the coil, but on the Corvette we used the wire that powered the injectors. The last wire is the start wire. We used the wire from the Corvette harness that ran to the starter solenoid and spliced it into the engine harness.

For the fuel system, we used a C5 Corvette fuel filter because it has a built in pressure regulator. Our car was already fuel injected so we used the lines already on the car. We upgraded the fuel pump to an Aeromotive Stealth 340 lph in tank pump.

It runs and drives. All the gauges work. Now all that is needed is to put the hood and bumper back on and drive it. Stay tuned for updates as we are planning on getting some passes in at the dragstrip.